1. Red needle cast and other needle diseases of radiata pine

5. Log fumigation: update on research into alternatives to methyl bromide

1. Red needle cast and other needle diseases of radiata pine

Red Needle Cast (RNC) is the latest in a suite of needle diseases that cause concern to radiata pine growers. It is caused by a Phytophthora, Phytophthora pluvialis. P.pluvialis is water-borne, and the wet winter and spring of 2017 meant the geographical extent and severity of RNC was greater than ever before.

Research on how to detect and monitor RNC using imagery from the European Space Agency’s Sentinel 2 satellite is making good progress. Satellite imagery covers very large areas, and is potentially a powerful tool for early disease detection. Sentinel 2 has a 5-day return period, captures data at 10-metre resolution, and the data is free and easy to access.

Challenges remain, for example, in identifying RNC-infected foliage specifically, and interpreting colour changes at different stages of the disease. The persistent cloud cover over New Zealand this past winter and spring has proved frustrating for the research team – an unavoidable pitfall of working with satellite imagery. The aim is to establish an automated satellite-monitoring capability, first for RNC and then for other diseases. Semi-automated continuous RNC monitoring will be trialled next season as a step towards this.

Scion is leading a MBIE programme which collaborats with a large number of national and international research teams to develop new tools for responding to new pest incursions in urban areas. Research areas include:

One of the most innovative aspects of the urban pest control programme is the development of ‘Cyborg’ UAV technology to locate pests in trees or other hide-outs. Scion is working with French scientists to develop a pheromone sensor which, when mounted on a UAV, can locate target pests by their odour. So far, a ground-based system has been successful; the next challenge is getting the sensor to work when airborne.

Eradication theory involves pushing pest populations to collapse. As population density decreases, so does population growth – this is known as the ‘Allee effect’, and can be brought about, for example, by enhancing:

Scion researchers are developing models to explore what happens to an established pest – the European gypsy moth – if its habitat becomes increasingly fragmented.  The models describe habitat thresholds – just how much of the pest’s habitat has to be removed for eradication to occur.

Developing new ways to communicate with urban communities in areas where risk of pest incursion is high, such as near ports and airports, is a priority. Researchers are working with urban pest monitoring and control agencies to develop new tools to help them better deal with the complex tasks they face.

The complexity of dealing with the public is well-illustrated by this analysis of the range of public perceptions associated with UAVs:

Amongst other approaches, researchers are taking their new technologies, including UAVs, to community meetings, so that locals get a chance to see the UAVs close up, and understand their role in pest control.

Myrtle rust, caused by the fungus Austropuccinia psidii, reached New Zealand for the first time in April 2017, wind-borne from Australia to Raoul Island. From here it has moved to Northland, Taranaki, the Waikato and the Bay of Plenty. It is easily spread: spores can be transported on cars, clothing, birds and animals, and tree nursery stock. By mid October 2017 it had been found at some 121 confirmed sites, with the number rising steadily.

The rust affect foliage, fruits and flowers of a wide and expanding host range. 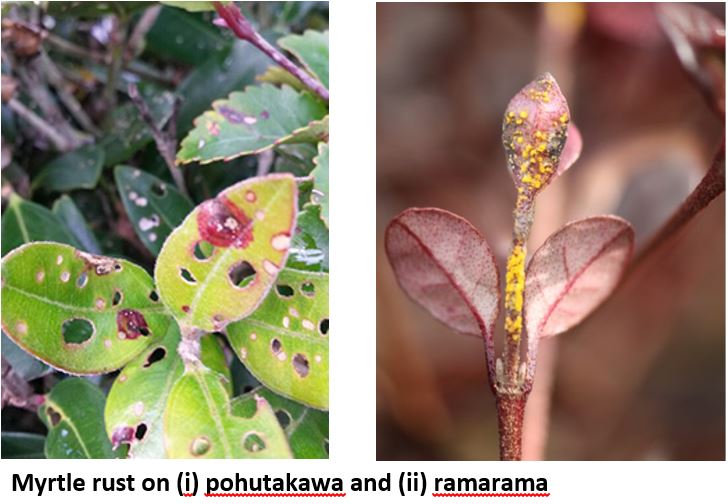 Myrtle rust on (i) pohutakawa and (ii) ramarama

5. Log fumigation: update on research into alternatives to methyl bromide

Log exports continue to rise, and the environmental impacts of methyl bromide (MBr) are becoming increasingly unacceptable. From 2020, new EPA legislation requires that MBr must be recaptured after use.

Work continues to find alternatives to MBr which will meet the different phytosanitary requirements of New Zealand’s various overseas log markets. The outcomes sought by the research team are:

A comprehensive literature review and other work have led to the conclusion that there is no ‘one size fits all’ solution for the log export industry. Possible alternatives include:

In summary – MBr continues to be an essential treatment for log exports to many countries. It is difficult to destroy or recapture, so alternatives are needed. The most promising fumigant is a chemical – EDN. Joule heating is also considered to have potential.

The industry needs time to address this challenge, and support, including from trading partners.